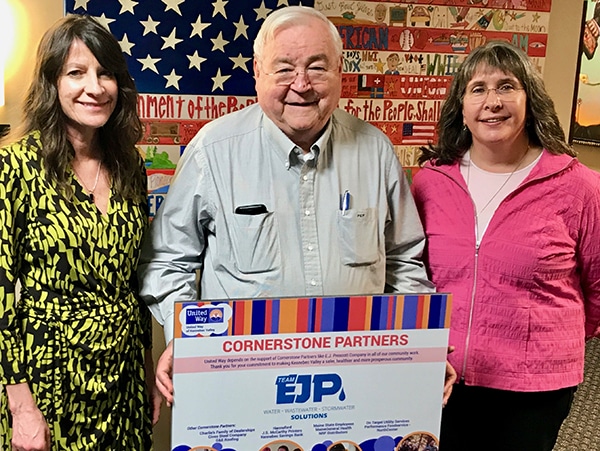 Headquartered in Gardiner, E.J. Prescott Company (EJP) has been providing quality products and services to the water industry for over 60 years. Throughout EJP’s history, helping people and organizations in need has always been an essential part of the company’s culture.

EJP has partnered with United Way of Kennebec Valley (UWKV) for more than 30 years. Through a successful employee giving campaign, the company has pledged to contribute a total of $76,199 in 2018—15 percent more than its 2017 campaign. This contribution again positions EJP as one of United Way’s 12 Cornerstone Partners, which collectively make up more than 53 percent of UWKV’s annual campaign. This is the second year of the recognition program.

EJP specializes in water, wastewater and storm water material distribution, serving New England, New York, Rhode Island, Connecticut, Ohio and Indiana. The company prides itself on lending a hand whenever it is needed. Past efforts have included hosting food, clothing and supply drives in the aftermath of the 9/11 Attacks and Hurricane Katrina. To ensure the donations helped the people who needed them, EJP donated the use of several of its PEP Transportation trucks to ship supplies within days. In addition, EJP founds numerous scholarships to support young people in achieving their higher education goals.

“As a family-owned business, Everett J. Prescott is proud to be a part of the United Way family and looks forward to helping to continue bringing programs that enrich our local communities,” said Peter Prescott, chief executive officer of EJP.

EJP is a founding partner of Day of Caring, United Way’s annual event that connects student volunteers from 15 local schools with work projects throughout Kennebec Valley. The company provides grills and lends EJP employees to conduct celebratory outdoor barbecues for students and staff in many schools. The company hosts the United Way’s Food Pantry Project, for which employees generously collect non-perishable items to donate to local food banks. Several EJP employees have also served on United Way’s Board of Directors, committing time and energy to ensure UWKV’s long-term success.

For more information about EJP, visit ejprescott.com. To learn more about becoming a corporate partner with United Way, visit uwkv.org or call 207-626-3400.