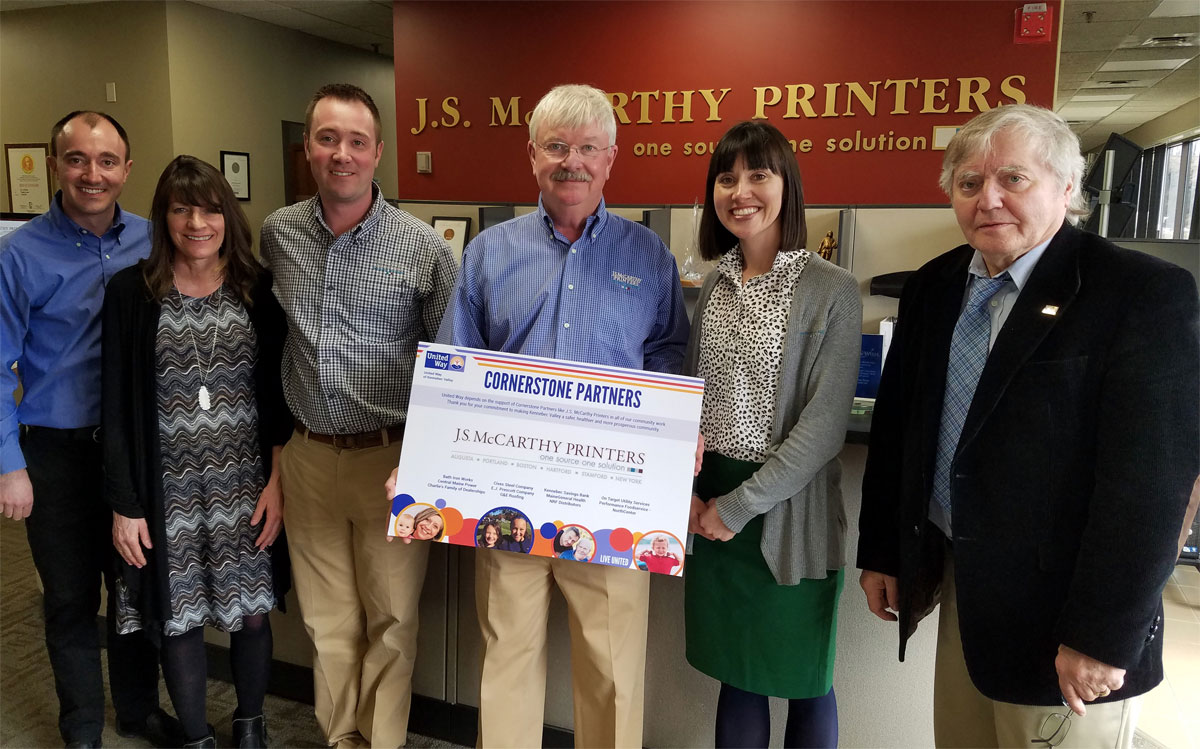 J.S. McCarthy Printers, an Augusta-based family-owned commercial printing company with locations in four states, has been partnering with United Way of Kennebec Valley (UWKV) for more than 25 years.

Since the 1940s, J.S. McCarthy Printers has experienced continuous growth and competitive success in a fast-paced and ever-changing industry. Rick and Patty Tardiff became owners of the company in 2000, consolidating the printing operations and personnel in Hallowell and Farmington and moving to a central Augusta location. As one of New England’s oldest and largest sheet-fed printing operations, the company strives for top-notch customer service, technological innovation and superior product quality.

Through a corporate gift and donations from many J.S. McCarthy employees, the company and its staff have pledged to contribute a total of $52,548 in 2017. This contribution establishes J.S. McCarthy as one of United Way’s 12 Cornerstone Partners, which collectively make up more than 45 percent of UWKV’s annual campaign.

“Giving back to the community is part of the fabric of our family-owned business, and our valued employees are vital to this effort,” said Michael Tardiff, director of communications. “Our staff members consistently contribute to United Way because it’s an easy way to support local people and play a role in changing the community for the better.”

The Tardiffs have invested millions of dollars in new equipment, training, personnel and technology, including three expansions to the manufacturing facility. The company also has acquired six companies, with other business locations in Portland, Maine; Boston and Canton, Mass.; Newington and Stamford, Conn.; and New York City.

J.S. McCarthy currently has 244 employees, and 188 of them are based in Augusta. Approximately 70 percent of J.S. McCarthy’s award-winning work is produced for clients located outside the state of Maine. Yet the Tardiff family’s Maine roots run deep, and they are grateful for the very skilled Maine craftspeople who contribute to the company’s success.

J.S. McCarthy is a major supporter of United Way’s initiatives, including the annual Day of Caring event that connects student volunteers from 18 local schools with work projects throughout Kennebec Valley. The company also hosts the United Way’s Food Pantry Project, for which employees generously collect non-perishable items to donate to local food banks.

Patty and Rick have served on numerous boards and volunteer committees, and now their four children, Jon, Amy, Michael and Matthew, are making their mark in the community—not only as owner operators of J.S. McCarthy but also as community volunteers who bring their respective talent and energy to boards, committees and area causes.

Michael and his twin brother, Matthew, chaired United Way’s 2014 campaign, spearheading the effort to raise more than $1.5 million for local nonprofits. In addition, Michael served as the United Way Board Chair in 2016.

“We learned at a young age about the importance of giving back to the community where we live, work and play,” said Michael.