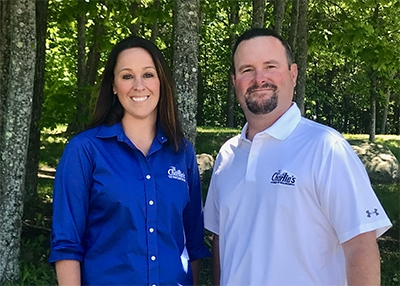 With the support of a Campaign Cabinet, comprised of business and community leaders who will build connections across the region, Steve and Elissa will lead the United Way in expanding its network of individual and corporate donors.

“Elissa and I are so excited to be able to chair this year’s campaign,” Steve said. “We are also proud of the over 250 employees at Charlie’s who share the same thoughts and beliefs as us when it comes to the United Way. We have been able to build a culture in our organization over the past 32 years of the importance of giving back to the community that has been so good to us. The United Way is the only organization of its kind that gives to so many worthy causes to help so many people.”

As part of its annual initiative, United Way workplace campaigns engage more than 115 local businesses each year, representing about 3,100 donors. Last year, donations to United Way totaled more than $1.74 million and assisted more than 22,000 people in 51 programs across the region. More than 30 percent of Kennebec Valley residents receive direct support from a United Way partner program.

Charlie’s Family of Dealerships is consistently the largest supporter of UWKV’s annual campaign. Through a corporate gift and employee donations, Charlie’s pledged to contribute a total of $187,526 in 2019—an all-time high for any business. The company’s culture of giving leads 100 percent of employees to elect to contribute to United Way through payroll deductions.

Over the past three years, UWKV has increased its fundraising campaign by 19 percent and has been able to partner with six new nonprofit programs as a result. At Charlie’s level of support, the company is the leader among United Way’s 12 Cornerstone Partners, which collectively make up more than 53 percent of UWKV’s annual campaign.

United Way has built a decades-long partnership with Charlie’s Family of Dealerships and the Shuman family. Charlie Shuman, the business’ founder, and his wife Nancy began supporting United Way soon after opening the car dealership in the late 1980s. Their children, Stephen and Elissa, now hold key leadership positions and are driving the company—and its philanthropic spirit—into the future.

“I feel so fortunate to be a part of this community and to call the Kennebec Valley my home,” Elissa said. “We’ve visited several of United Way’s partner programs, and it is truly heartwarming to see so many amazing people and organizations come together to support those in need.”

Beyond United Way, Charlie’s Family of Dealerships forms strong partnerships with other area nonprofits to improve the well-being of Kennebec Valley people and the economic vitality of the region.

A Winthrop resident, Steve holds a bachelor’s degree from the University of Maine and has worked at the dealership full time since 2000. He has also served as the chair of UWKV’s golf tournament for many years, doubling the amount raised to support the community last year. Elissa lives in Richmond and graduated from the University of Maine with a degree in kinesiology and a minor in business administration. She joined the Dealership full time in 2003. Elissa and Steve each have three children and are heavily involved in their local youth sports leagues and communities at large.