Leaving a legacy in the Kennebec Valley 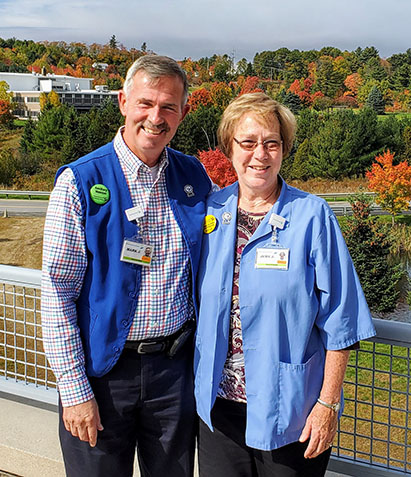 Mark and Judy Johnston are about to begin their 45th year of involvement and giving with United Way of Kennebec Valley (UWKV). In fact, Mark’s support of UWKV precedes the couple’s wedding! To say they love United Way would be an understatement.

Mark was introduced to UWKV much like anyone else: he was handed a workplace pledge form as part of orientation. He had no idea what United Way was, but he was happy to invest one percent of his income in his community. Three years later, he joined UWKV’s Board of Directors and has been actively involved ever since, even chairing the 2004 campaign.

“We always try to be active in the community and give our resources by contributing to a lot of different causes,” Mark said. “But probably our largest single collective donation has been to UWKV since it does help the entire community.” The Johnstons are one of nine families who have invested in the future of the Kennebec Valley community through United Way’s Legacy Society.

“I like the fact that when you support United Way you are supporting everyone,” Judy said. Mark agreed, adding, “you can give to a lot of causes all at once through payroll deduction. It makes it so easy to give back.”

When the Johnstons started estate planning, they thought about the legacy they wanted to leave in the Kennebec Valley. “We have been making contributions financially to charities for 44 years,” Mark began, “and it seemed unfair that when we pass away, the charities would no longer benefit from our contributions.” Changing their will to include their favorite charities was very easy since they already had a will in place.

While the Johnstons have included several charities in their will, individual circumstances dictate what is best for a family. Simply changing the benefactor on life insurance is another available option.

Mark and Judy are both retired now. However, they remain incredibly active in the community. On Fridays, you can find Mark and Judy at MaineGeneral (a United Way Partner Program) where Mark plays the piano in the main lobby waiting area and Judy is a volunteer for inpatients. There are several ways that you too can continue making an impact on the Kennebec Valley community well after you retire.

If you or someone you know is interested in becoming a legacy donor, please contact mboyer@uwkv.org for more information.