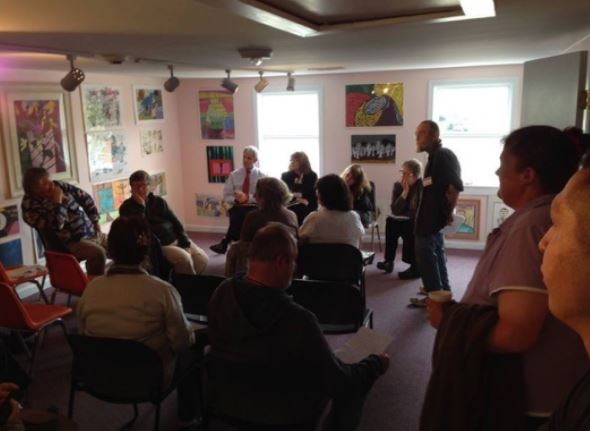 The following story was provided by Motivational Services, a United Way partner. Your United Way donations support this program.

In 2017, a gentleman living in Waterville started coming to Augusta for groups at Togus. His case manager encouraged him to check out the LINC Center, which is close to the Kennebec Explorer bus stop, which he used as transportation to get from town to town. He had visited the center a handful of times from 2014 to 2017, but it did not interest him much. One day he popped in while he was waiting for the next bus. He recognized some familiar faces and felt welcomed, like he visited the center every day.

As time went on, he got more involved with organizing trips and taking part in community outings. He had been working on his recovery and found great interest in Dual Recovery Anonymous (DRA) and asked if he could facilitate this group at the center. Unfortunately, he began feeling overwhelmed and lost momentum—within a few weeks the group fizzled.

He took a little time off from the center, primarily because of his schedule and transportation logistics. He would still pop in here and there, but mostly to reminisce. A year or two had passed before he was able to move back to Augusta. Out of his own volition this time, he reached out to the new program manager and asked if he could start the DRA group again. They advised him to stop by the center during a community meeting to ask if there was interest. People were excited to have him come back and offer the group. It was set tentatively for five weeks. That was in the winter of 2019.

This group is still on the schedule every Tuesday at 3pm—even during the pandemic where he offered it via zoom. People genuinely value his energy and passion for recovery which cultivated confidence, his eagerness to be more involved at the center gleamed. A few months later he introduced another group idea, New Age Self-Discovery and Spirituality. This is a concept based on people connecting to their higher power—which he creates the curriculum every week!

This has been successful for over a year, through the pandemic too! He states, "the LINC center has given me purpose and meaning to get through my day. I cannot work because of my VA rating, volunteering has been of significant benefit to me—something I need badly for my mental health. Please do not confuse this as just words your reading—contributing and being a part of the LINC community has fostered the environment for my success."