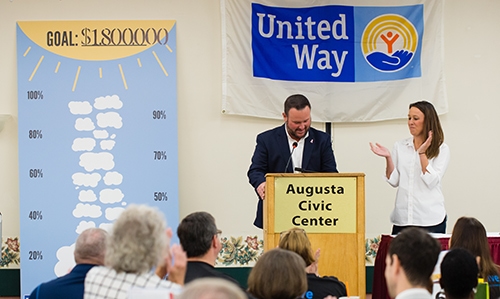 AUGUSTA – United Way of Kennebec Valley (UWKV) launched its 2019 fundraising season with $1.16 million in committed support, the most ever pledged this early in the campaign. Twenty-six businesses reported their advance campaign success to a crowd of more than 320 people at the Campaign Kickoff on Thursday.

“United Way has always been really important to our family,” Elissa said. “We have stepped up our giving this year and we encourage others to do the same. The best way to do that is to show people that every dollar counts.”

Steve and Elissa are charged with rallying the people of Kennebec Valley to give any amount they can to support community members that need a hand-up. Early progress indicates that United Way has raised 64 percent of its overall goal to date.

Steve and Elissa also presented the organization’s 2019 campaign video, which showcased the campaign theme, “Every Dollar Counts,” highlighted food insecurity in Maine and celebrated the buying power of a dollar. Together donors “Power the Dream” for a stronger, healthier Kennebec Valley by supporting 51 nonprofit programs.

“When considering the community needs we wanted to focus on this year, food insecurity was number-one,” Steve said. “More than 200,000 Mainers do not have enough food on a regular basis. If one person donates $1 a week for a year, they can provide 208 meals for someone in need. We are all responsible for making this community great, and for teaching the next generation how to do the same.”

Courtney Yeager, executive director of United Way, thanked attendees for serving as crucial messengers of United Way’s work. “Each of you is here today because you want to be,” Yeager said. “You’re interested in what’s going on in our community and how you can help. If you ask me what our secret weapon is this campaign season, I would say it’s you—and it’s always been you. You make change possible.”

United Way’s Community Builder Award was presented to Rob Gordon, the former executive director of UWKV, by longtime United Way supporters Charlie and Nancy Shuman. Gordon was celebrated for his 33 years of generosity and his dedication to strengthening the Greater Augusta community. The award was renamed the “Rob Gordon Community Builder Award” in his honor.

“I am very proud of the work we all do. I want to thank you for all the large, the small and the very specific ways we work together to strengthen our community,” Gordon said.

During the event, Al Smith, executive director of the Augusta Food Bank, shared the importance of both cash and product donations. “People often ask me what type of donation is better, giving money or food. I tell them ‘yes’ because both things are needed,” Smith said. “With the money donated just this morning, I can buy 1,900 meals for someone in need.”