United Way has raised 74 percent of fundraising goal so far 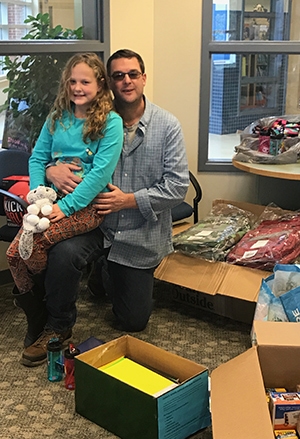 AUGUSTA--United Way of Kennebec Valley has raised 74 percent of its $1.7 million campaign goal to date, with two months remaining in the fundraising season. Chris Russell and his 8-year-old daughter Gabby, who are chairing the effort, convened a cabinet of community leaders to help grow United Way’s network of donors.

Chris, project manager/supervisor at G&E Roofing and a longtime United Way board member, has met with several businesses in an effort to raise a record-breaking $1.7 million to support new and expanded human service programming.

“Gabby and I are humbled by the campaign’s early success, and I’m proud to live and work in a community that has not only shown my daughter the value of giving back but allowed her to be an important part of the process,” said Chris. “We know that every dollar counts when it comes to supporting the people of Kennebec Valley, and we invite more businesses and local folks to join us.”

United Way continues to grow new initiatives that expand the organization’s footprint. More than 40 civic-minded professionals with a passion for volunteering make up the Emerging Leaders Society, which is open to anyone who donates to United Way at a certain level and volunteers with local organizations. In addition, Dr. Shanna Gagnon and Nathan Curtis, the owners of Farmingdale-based Gagnon Dental, have invited local businesses to become members of United Way’s 365 Small Business Circle with a dollar-a-day contribution. More than 45 businesses have already joined this community-wide effort.

United Way will unveil its final fundraising total at the annual Campaign Celebration, which will be held on Jan. 31 at 5 p.m. at Central Maine Power.

There is still an opportunity for businesses and individuals to participate in the campaign. Please contact cyeager@uwkv.org or 207-626-3400. For more information, visit uwkv.org.