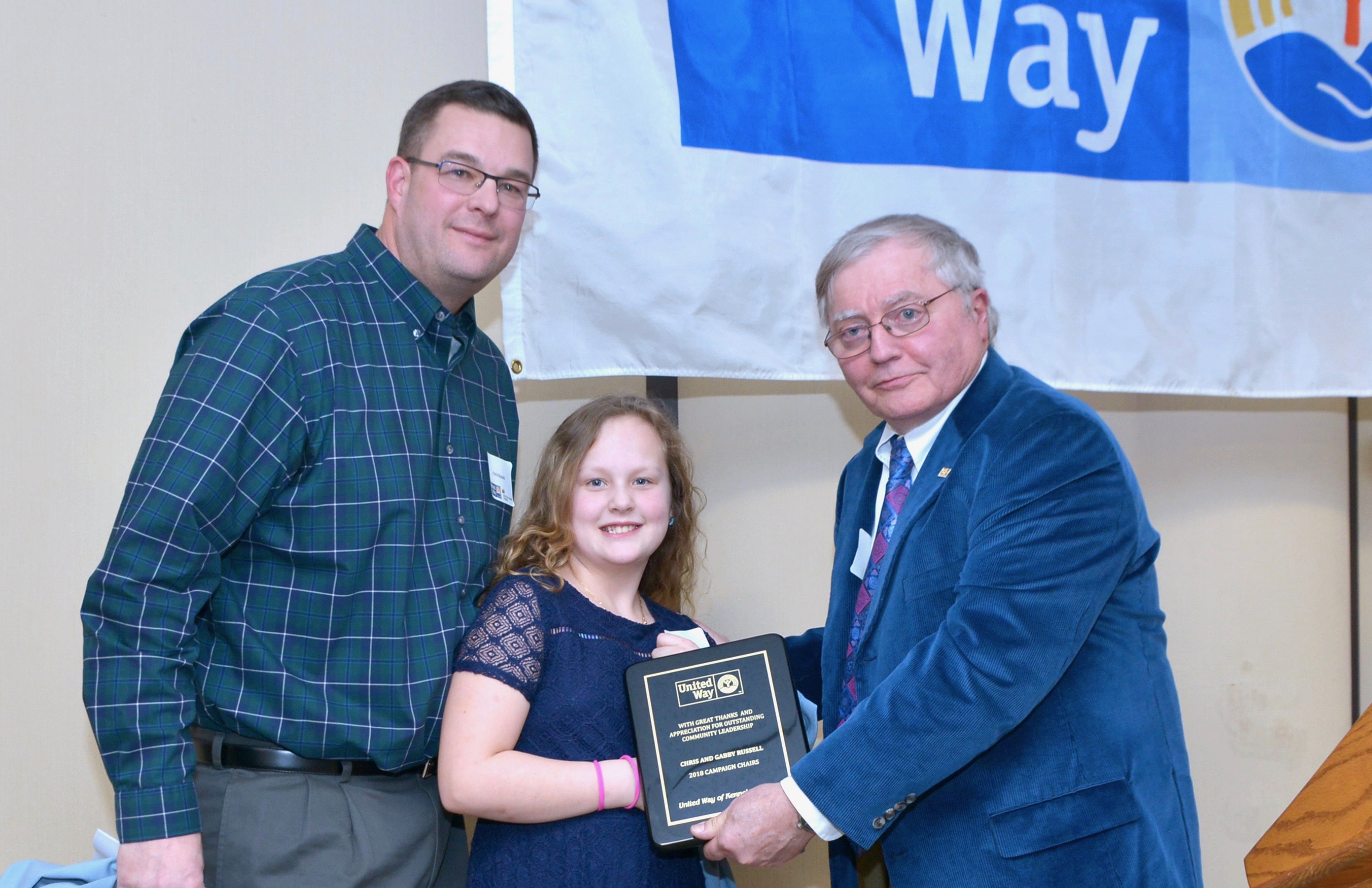 AUGUSTA - United Way of Kennebec Valley (UWKV) recently announced a 2018 fundraising total of $1,745,277—the most ever collected in support of its 48 partner programs. Campaign Chairs Chris and Gabby Russell shared this news at UWKV's Campaign Celebration, which attracted more than 200 people to Central Maine Power on Thursday.

The Russells challenged the community to raise $1.7 million in order to fund unmet local needs related to basic needs, health care and education. Together, UWKV supporters exceeded that goal, increasing the campaign by 5 percent.

When the Russells announced the campaign total, they stressed that ownership of this success belongs to the entire community. "We hope you know that this success is your success,” Russell said, addressing event guests, “and together we’ll be able to make all the difference to the 20,000 people who rely on United Way services each year.”

During the event, the Russells presented several awards to outstanding partner programs. A creative group of staff from NRF Distributors were honored as Employee Campaign Managers of the Year. Townsquare Media was named New Campaign Partner of the Year for its standout effort in initiating an employee fundraising effort. The Small Business Partner of the Year Award was presented to Macpage for increasing staff giving by 22 percent and achieving 100 percent participation. In addition, Central Maine Power was named United Way's Large Business Partner of the Year for its multifaceted support that increased staff donations by 64 percent and participation by 85 percent. The Chairperson's Recognition Award was presented to Lajoie Brothers for broadening campaign efforts and introducing a dollar-for-dollar matching corporate gift to encourage staff to participate. United Way also unveiled a new award for Public Service Partner of the Year, which the Russells presented to City of Augusta employees.

The Russells also credited incremental successes throughout the fundraising season, including United Way's growing Emerging Leaders Society, the 365 Small Business Circle that has raised more than $38,000 in a three-year period, and strong staff and volunteer efforts to recruit new workplace campaigns. In addition, 14 businesses were also acknowledged for achieving full staff participation in giving.

UWKV Executive Director Rob Gordon and Herling presented the Capital Area New Mainers Project (CANMP) with United Way's Norm Temple Community Volunteer Award, which has been recognizing outstanding volunteerism in the Kennebec Valley area since 1994. Chris Myers Asch, the organization’s director, accepted the award. “CANMP is working with folks to build a thriving, integrated multicultural community in central Maine,” Myers Asch said. “And we now have people who are coming to Augusta to see how it’s done.”

United Way Board Chair Maria Hays of Central Maine Community College, who will serve a second term as chair in 2019, closed the event. “I want to thank you all for coming this evening, but more importantly thank you for the work you do on behalf of our entire community.”

For more information about UWKV, visit uwkv.org or contact 626-3400.