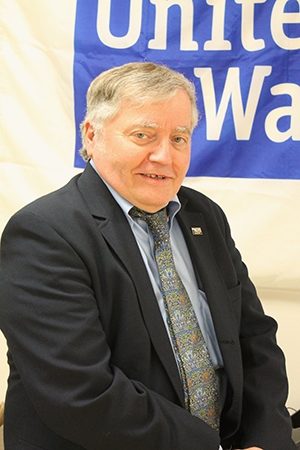 AUGUSTA – After more than three decades of service to United Way of Kennebec Valley (UWKV), Executive Director Rob Gordon has announced his plans to retire from the organization in August 2019.

The UWKV Board of Directors has named Courtney Yeager as the organization’s incoming Executive Director, effective Aug. 10. Courtney has served United Way as the director of resource development and marketing since 2016. Before joining the organization, Courtney directed fundraising and marketing strategy at Crisis & Counseling Centers, a United Way-funded program, and served as a UWKV volunteer.

Rob joined United Way in 1986 as the executive director. He attributes the organization’s long-term success to its generous contributors, committed volunteers and thoughtful United Way board members. Over the course of his United Way career, Rob was responsible for the annual fundraising effort, which, in 2018, reached $1.75 million—the highest amount in the organization’s 64-year history.

“I have had the immense good fortune to work with many hundreds of generous and thoughtful volunteers,” Rob said. “The relationships formed and the experiences shared remain a lasting treasure to me.”

During Rob’s tenure, and with the support of the entire community, the number of programs that United Way funds has more than doubled and community initiatives have significantly expanded. In 2000, Rob partnered with local businesses to establish a Day of Caring student volunteer program, which has evolved to give 5,200 students in 17 schools an opportunity to serve their community each year. Under Rob’s leadership, more than 65,000 students have engaged in volunteerism at a young age, completing more than 3,400 volunteer projects in the Kennebec Valley.

Rob also collaborated with MaineGeneral Health, the City of Augusta, and several faith-based organizations in 2009 to launch the Augusta Community Warming Center, a safe escape from the cold weather for all local people. United Way managed the center’s operation for eight seasons before Rob transitioned the program to the care of Bridging the Gap, a United Way partner program. Rob was also instrumental in developing a rapid response to major community fires in 2014, launching a fund to help fire victims recover.

“Rob is a true friend of the people of Kennebec Valley,” said Maria Hays, board chair at UWKV. “Through 33 years of dedicated and passionate service, Rob has created lasting relationships with so many wonderful members of our community. His enthusiasm and spirit for giving back to the community has grown the United Way of Kennebec Valley to what it is today.”