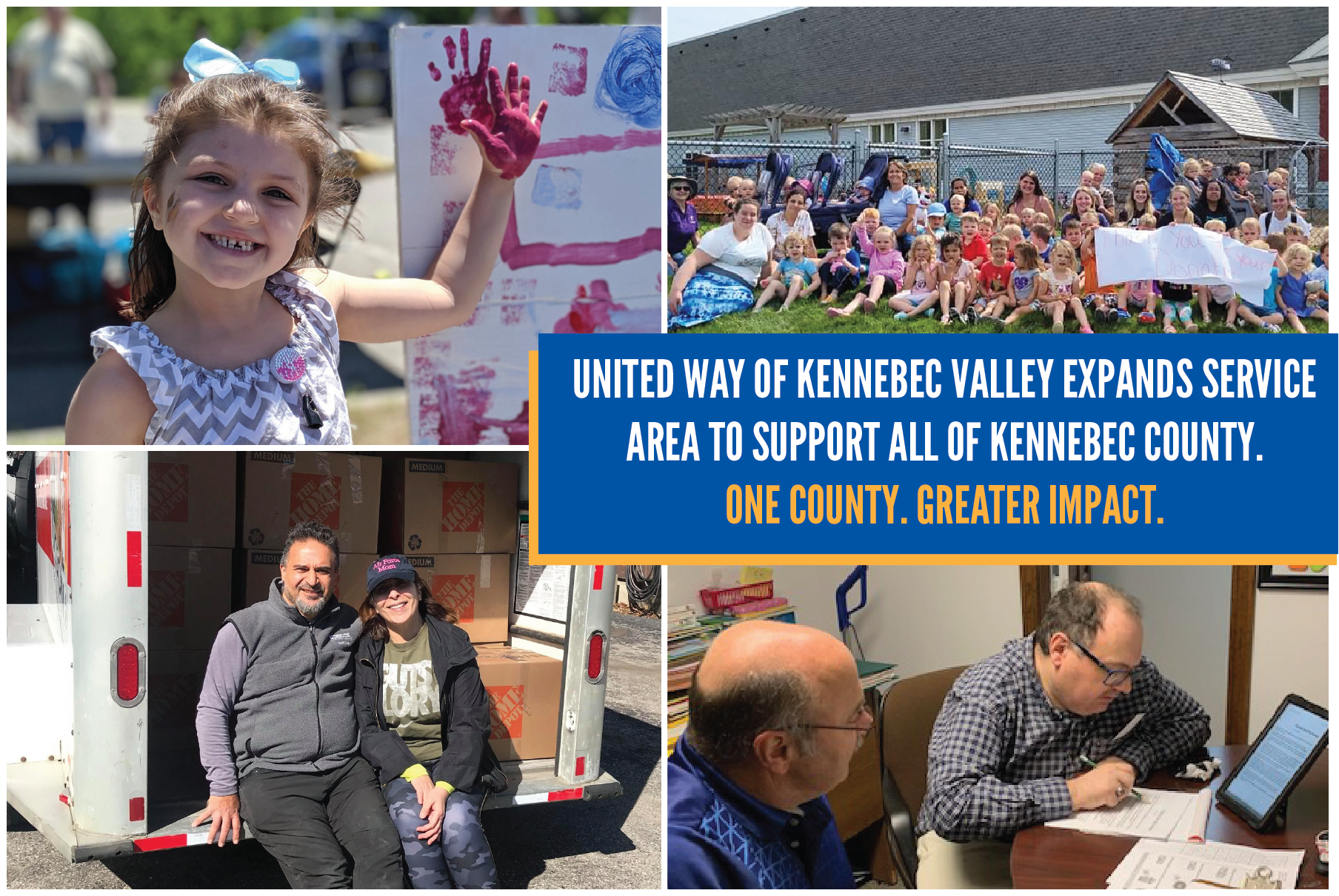 Effective immediately, UWKV will expand its existing territory of 20 towns in southern Kennebec County to assume management of community impact and fundraising efforts in the nine remaining Northern Kennebec towns, unifying all United Way efforts within Kennebec County for the first time. The additional towns are Albion, Belgrade, Benton, Clinton, Mt. Vernon, Oakland, Rome, Winslow and Waterville. Vassalboro and China, towns that the two organizations previously split based on zip codes, will fall into UWKV’s expanded region as well.

Alan Smith, president and CEO of United Way of Mid-Maine, added, “For the good of the community, we felt it was time to put Kennebec County back together again at United Way. The Kennebec Valley chapter has experienced much success with its work in the southern part of the county, and we stand ready to help ensure this is a smooth transition for local nonprofits, businesses and other supporters.”

The decision to combine Kennebec County efforts under one United Way follows extensive discussions between the boards of directors from both United Ways and was driven by businesses and donors in both regions.

“As the leader of a business with multiple locations across Kennebec Valley, we recognize the value of having one regional campaign to eliminate the duplication of efforts and reduce the administrative burden,” said Chuck Hays, president and CEO of MaineGeneral. “Additionally, we know that the challenges facing our communities do not recognize town lines.”

Similarly, nonprofit organizations funded by both United Ways will no longer have to participate in two different grant cycles, allowing agencies to focus more on their own mission and less on the bureaucracy associated with grant management. Currently UWKV funds the majority of UWMM’s nonprofit partner programs, though to support people based in the southern part of the county, which demonstrates the significant overlap between the two regions and the strength of the funding relationships that already exist.

“The Waterville Community Dental Center has received funding from both United Way chapters for years to support our sliding fee dental program,” said Dr. Barbara Covey, board chair of the Center. “For us, that’s meant writing two funding applications, tracking two sets of data—but essentially helping the same population. Bringing all Kennebec County towns under one umbrella will enable us to better serve local people across the region.”

Amy Tardiff, board chair of UWKV and vice president and general counsel at J.S. McCarthy Printers, confirmed that the boards aimed to offer a more robust experience for nonprofit partners and businesses—especially those with a presence in both regions. “Becoming the county-wide United Way will enable UWKV to partner with regional organizations and attract new funding from individual and corporate donors who are interested in achieving broader, long-lasting social change,” said Tardiff.

Kennebec Savings Bank, a longtime corporate partner of both United Way chapters, agrees that having a single United Way to serve everyone in Kennebec County will benefit the region. “Independently, United Way of Kennebec Valley and United Way of Mid-Maine have both been strong partners to the central Maine community,” said Andrew Silsby, president and CEO of Kennebec Savings Bank and UWKV’s 2021 campaign chair. “Uniting the region under one United Way will ensure that more dollars stay with local nonprofits, making the Kennebec Valley region an even greater place to live, work, and play.”

UWKV’s vision is to foster a strong, self-sufficient community in which people are educated, financially stable and healthy. Historically, UWKV has raised $1.7 million annually to support 45 nonprofits throughout southern Kennebec County—serving more than 20,000 local people a year. The organization plans to expand its efforts to Northern Kennebec immediately and welcomes any business or individual hoping to make a difference in their community to reach out.

“Together, we can do more than any of us can do alone to serve individuals and families across Kennebec County,” Yeager said.