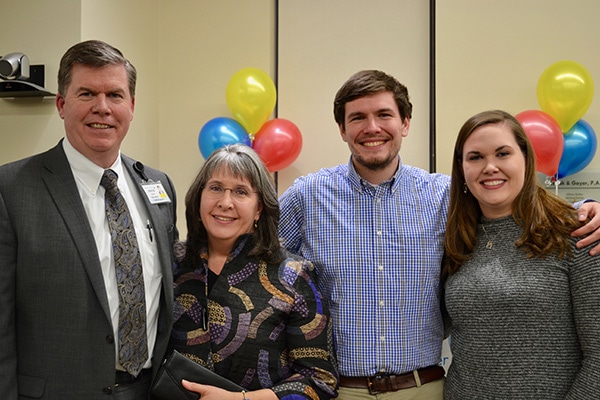 AUGUSTA - United Way of Kennebec Valley (UWKV) recently announced that its 2017 fundraising campaign raised $1,669,459, the most ever collected in support of its 50 partner programs. Campaign Chairs Chuck and Maria Hays shared this news at UWKV's revamped Campaign Celebration, which attracted more than 180 people to MaineGeneral Medical Center on Wednesday.

After considering that nonprofits' requests for United Way funding had exceeded available dollars last year, the Hays family issued a significant challenge to the community: work together to increase last year's $1.55 million campaign by 5 percent. Together, UWKV supporters exceeded that goal, raising the overall campaign by 7 percent. In particular, 28 businesses met or exceeded the 5 percent goal, largely contributing to the campaign's record-breaking success.

When the Hays family announced the campaign total, they stressed that ownership of this success belongs to the entire community. "Each and every one of you stepped up to our challenge by increasing your personal gift or inspiring others to dig a little deeper," said Chuck Hays, president and CEO of MaineGeneral Health. "Together, we'll be able to make all the difference to over 20,000 people who rely on United Way for basic needs, health care, education and financial stability."

The funds raised during the 2017 Campaign will directly support UWKV's partner programs throughout the year, as determined by an allocations committee that reviews and visits organizations before allotting funds. The allocations committee is comprised of local volunteers and United Way board members.

During the event, Chuck and Maria Hays, along with UWKV Board Chair Craig Garofalo of Kennebec Savings Bank, presented several new awards to outstanding partner programs. Cory Lathrop and Andrew O'Hearn, of Charlie's Family of Dealerships, were honored as Employee Campaign Managers of the Year. Gagnon Dental was named New Campaign Partner of the Year for its standout effort in launching an employee fundraising effort. The Small Business Partner of the Year Award was presented to Oakes & Parkhurst Glass for increasing staff giving by 65 percent and encouraging new donations. MaineGeneral Health was named United Way's Large Business Partner of the Year for its multifaceted support that increased staff donations by 55 percent. To conclude the fundraising-related awards, Chuck and Maria presented the Chairperson's Recognition Award to the Maine State Employees Combined Charitable Appeal Campaign, which was led by the Maine Department of Transportation this year.

Chuck and Maria presented NRF Distributors' Fresh Starts initiative with United Way's Norm Temple Community Volunteer Award, which has been recognizing outstanding volunteerism in the Kennebec Valley area since 1994. Fresh Starts fills a void in the community by supporting people who are transitioning to stable housing situations. Sue Gayne, NRF's vice president of human resources, accepted the award on behalf of her volunteer team. "NRF's President and Founder Norman Pomerleau had the idea to have employees collect, warehouse and distribute household items for people starting over," she said. "People start over for so many reasons. At the end of the day, a fresh start empowers a new beginning and helps rebuild a home."

United Way's Emerging Leaders Society, comprised of 30 community members who donate both time and money in support of United Way, held a collection of personal care items as guests entered the event. Attendees donated dozens of bags of soap, toilet paper and other sanitary items to Bridging the Gap, a United Way partner program that dispenses basic needs items to more than 350 local people twice a month.

At the meeting's close, Maria Hays, who works as a professor at University of Maine at Augusta, assumed the position of UWKV's 2018 board chair. "As a board member and campaign co-chair over this past year, I have seen what we can accomplish through the life-changing power of community," Maria said. "We need you now more than ever, and I hope that you'll continue standing by United Way's side as we face and conquer new challenges, year after year. It's the people in our community who spark change, and I'm proud to say that I'm living and working among the best right here in the Kennebec Valley."

Jenny Small, a longtime board member and community volunteer, was elected as board vice-chair. In addition, seven community members were elected to serve an initial three-year board term: Katie Doherty of the Kennebec Valley Chamber of Commerce; Joseph Lajoie of Lajoie Brothers; Eric Lind, a community volunteer; Jessica Norton of Kennebec Savings Bank; Pam Rogers of Cross Insurance; Barbara Sweezy of TD Bank; and Amy Tardiff of J.S. McCarthy Printers.