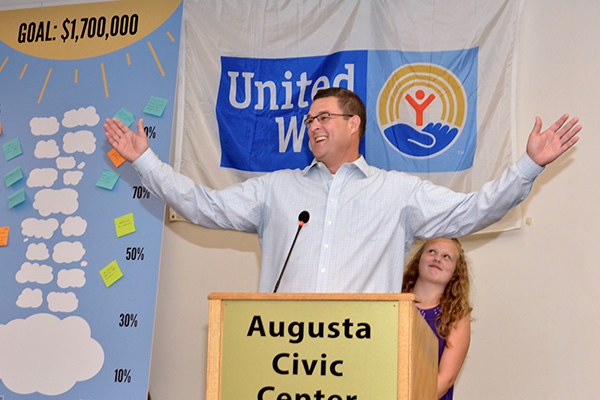 AUGUSTA – United Way of Kennebec Valley (UWKV) launched its 2018 fundraising season with $1.1 million in committed support, the most ever pledged this early in the campaign. Twenty-six businesses reported their advance campaign success to a crowd of more than 320 people at the Campaign Kickoff on Wednesday.

Chris Russell and his 8-year-old daughter Gabby, of Farmingdale, are co-chairing United Way’s annual appeal effort. They announced a goal of raising $1.7 million by December.

Chris, project manager/supervisor at G&E Roofing and longtime United Way board member, and Gabby, a third grader at Hall-Dale Elementary School, are charged with mobilizing the caring power of those who live and work in Kennebec Valley. Early progress indicates that United Way has raised 69 percent of its overall goal to date.

This year’s campaign theme encourages donors to make a gift that will “Power the Dream” for a stronger, healthier Kennebec Valley by supporting 48 nonprofit programs. “Everyone’s dreams are different,” Chris said. “I want my daughter to understand that for some people, their dream is to have enough food on the table or learn to read as an adult. It’s our job as community members to help power that dream.”

The Russells also presented the organization’s 2018 campaign video showcasing the Children’s Center, an Augusta-based organization offering early intervention programs to young children. Macklyn Nason, whose 5-year-old son Malachi attends the Center and receives several supports, expressed her gratitude to United Way contributors at the breakfast. “We never thought Malachi would talk, and now he says actual words,” Nason said. “Thank you all so much for making this possible.”

Rob Gordon, executive director of UWKV, presented United Way’s Community Builder Award to John and Lisa Rosmarin as well as John Fallona. These individuals were celebrated for their consistent leadership-level contributions and the spirit of generosity they have fostered in the Greater Augusta community.