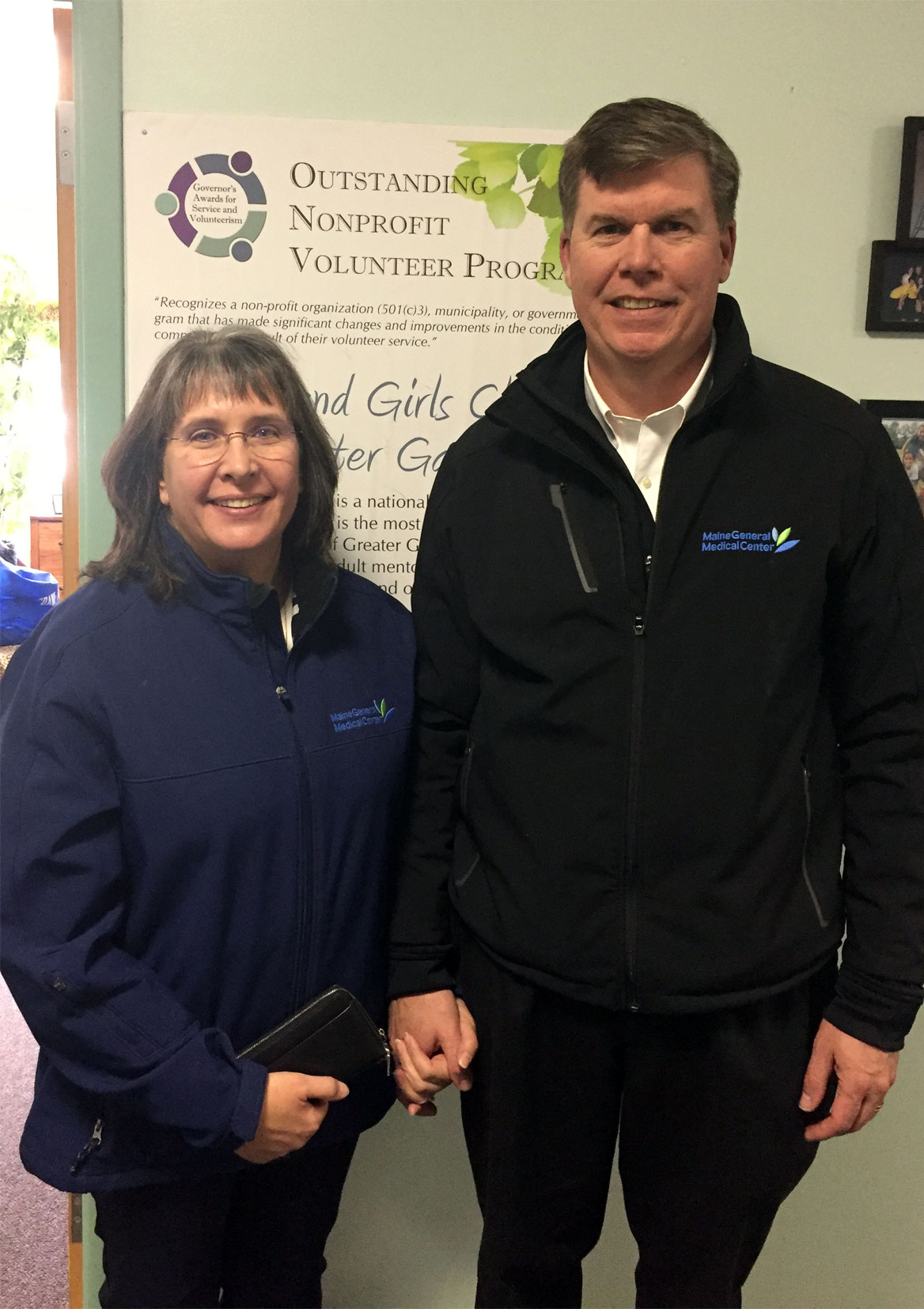 AUGUSTA – United Way of Kennebec Valley (UWKV) recently named Chuck and Maria Hays as its next campaign co-chairs, charged with leading the organization’s 2017 fundraising efforts. Chuck, president and chief executive officer of MaineGeneral Health, and Maria, professor at the University of Maine at Augusta, will lend their expertise in building prosperous community partnerships to mobilize the caring power of those who live and work in Kennebec Valley.

Chuck and Maria will chair the campaign with their two adult children, Chuck and Katie. With the support of a Campaign Cabinet, comprised of business and community leaders who will facilitate campaign support from across the region, the Hays family will lead the United Way in expanding its network of individual and corporate donors.

As part of its annual initiative, United Way’s workplace campaigns engage more than 125 local businesses each year, representing more than 3,500 donors. Last year, donations to United Way totaled more than $1.5 million and assisted more than 19,000 people in 49 programs across the region.

Chuck joined MaineGeneral in 1995 as director of engineering. In the more than 20 years since Mid-Maine Health System joined Kennebec Valley Health System to become MaineGeneral Health, Chuck has held a number of positions of increasing responsibility with the state’s third-largest health care system. As senior vice-president and chief operating officer, Chuck headed the team responsible for the construction and operation of the Harold Alfond Center for Cancer Care, which opened in 2007. Later that year he was named president and CEO of MaineGeneral Medical Center before becoming president and CEO of the parent company, MaineGeneral Health, in 2012.

Through corporate and employee donations, MaineGeneral has distinguished itself among United Way’s 12 Cornerstone Partners, which collectively make up more than 45 percent of UWKV’s annual campaign. The health care system generously supports all of United Way’s initiatives, including the Augusta Community Warming Center, a program that provides a safe, warm place for people to escape from the cold in winter months. MaineGeneral also collects food for United Way’s Food Pantry Project and supports the Day of Caring student volunteer program.

“Our employees live, work and play in the Kennebec Valley. We take very seriously our leadership role in supporting those most in need in our communities,” said Chuck. “Supporting the United Way of Kennebec Valley is a natural extension of the caring and compassion we bring to giving the best care possible, and our family is honored to lead the United Way campaign this year.”

Chuck holds a bachelor’s degree in engineering from Massachusetts Maritime Academy. Upon graduation in 1986, he began his career with General Dynamics in Groton, Conn., where he supervised nuclear testing for the 688 class fast attack submarines. He then moved to Framingham, Mass., to work at a firm that provides operational and regulatory consulting for major utilities throughout the United States. Chuck later earned a Master of Business Administration degree, which he began at Bentley College and completed at Thomas College in Waterville.

In addition to his support of United Way, Chuck has chaired and been board member of many organizations including American College of Healthcare Professionals, Kennebec Valley Chamber of Commerce, Kiwanis, Kennebec Savings Bank, Work Force Investment Board, Maine Hospital Association and Augusta Board of Trade, among others.

Maria, who is now an adjunct faculty in the Medical Laboratory Technology program at UMA, graduated from Massachusetts Bay Community College in 1983 with a medical laboratory technician degree. She went on to earn a bachelor’s degree in biology from Framingham State College and worked in the clinical laboratory field, as well as the immunology and oncology fields, for biotechnology companies.

“In our family, giving back to the community has always been a priority,” said Maria. “As campaign leaders, we hope to help people recognize that making a gift through United Way enables the community to solve problems that none of us can solve alone.”

If you are interested in serving on the United Way Campaign Cabinet, please contact 207-626-3400. For more information about United Way, visit uwkv.org.