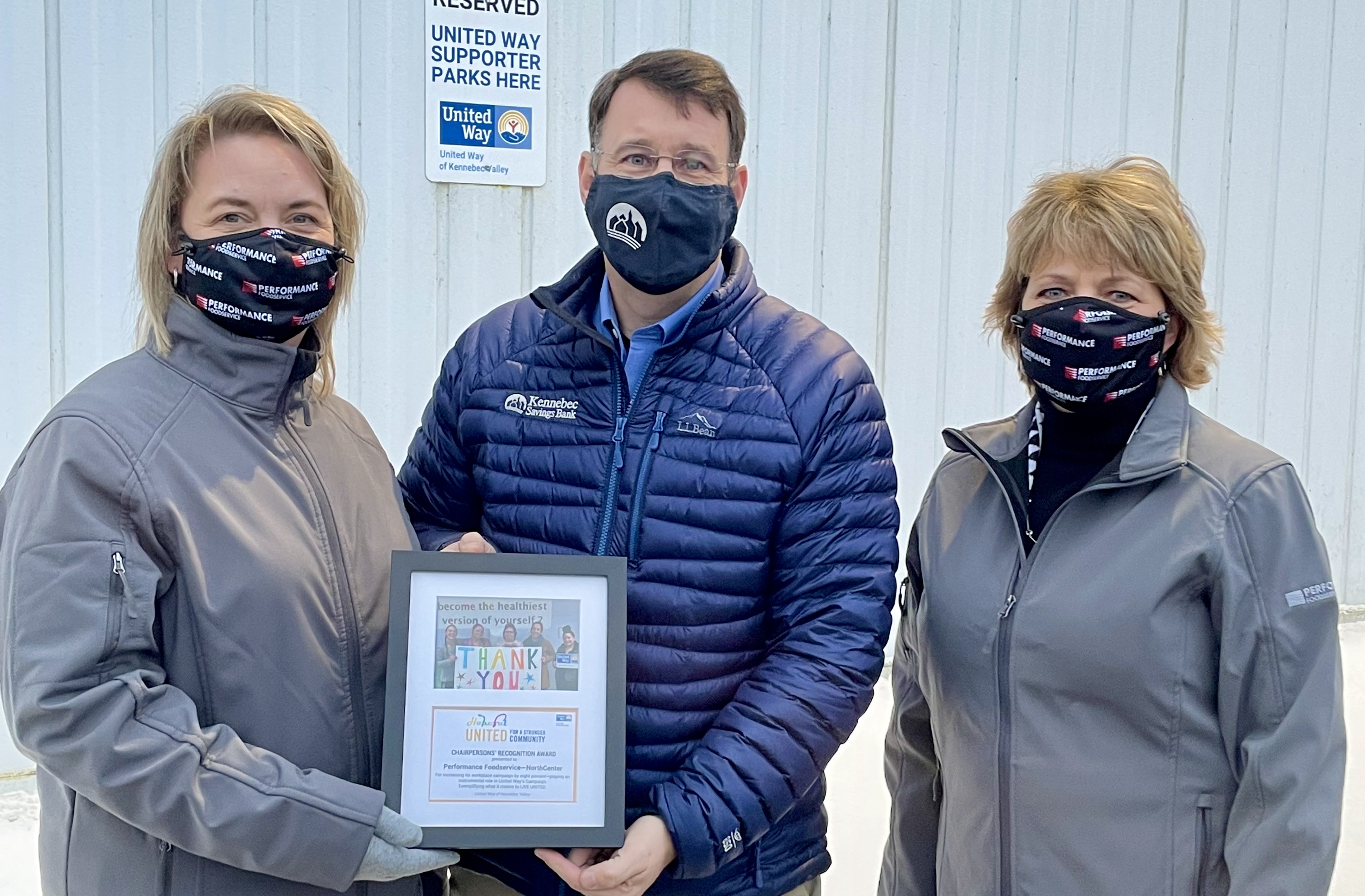 AUGUSTA - United Way of Kennebec Valley (UWKV) announced a 2021 fundraising total of $1,824,975 on Wednesday afternoon—a 12 percent increase over the past year and the most the organization has ever raised for 46 nonprofit partner programs across its newly expanded Kennebec County region. Campaign Chair Andrew Silsby, president and CEO of Kennebec Savings Bank, shared this news at UWKV's virtual Campaign Celebration, which attracted more than 90 people.

In September, Silsby challenged the community to raise 5 percent more than last year through Kennebec Savings Bank's High Five Challenge. For donors who increased their pledge by 5 percent or more over the previous year, the bank matched their donation dollar for dollar, up to $25,000. Silsby announced that 68 percent of businesses and their employees met or exceeded the 5 percent challenge, resulting in a boost of $150,000.

"Together we are changing the story for thousands of people right here in Kennebec County, and we really are creating hope," said Silsby, referencing UWKV's campaign theme: Hopeful, United for a Stronger Community. "For me, being hopeful isn't a one-time thing or even a one-year commitment," Silsby continued. "It really is a way of life, and I am grateful that so many people and organizations turned out to support the United Way."

The funds raised during the campaign will support UWKV's partner programs across Kennebec County throughout 2022. These programs focus on improving access to health, education and financial stability for all people.

During the event, Silsby presented several awards to outstanding businesses. The New Campaign Partner of the Year Award was presented to Alfond Youth & Community Center for raising more than $2,000 during its first UWKV campaign. Kennebec Behavioral Health was awarded Public Service Partner of the Year for the organization's creativity and fundraising growth of 106 percent. The Small Business Partner of the Year Award was presented to Blane Casey Building Contractor, Inc. for launching a creative ice shack fundraiser that has added more than $5,000 to UWKV's campaign. Lajoie Brothers was named United Way's Large Business Partner of the Year for increasing its workplace campaign by 26 percent. Finally, Silsby presented the Chairperson's Recognition Award to Performance Foodservice - NorthCenter for broadening its campaign efforts to other states and increasing special event revenue—all of which resulted in an 8 percent increase in support.

Silsby also credited incremental successes throughout the fundraising season, including new partnerships with Northern Kennebec-area businesses; growth among 62 business partners that increased donations; and welcoming one new family to the Tocqueville Society, the United Way donor group that contributes at the highest levels.

UWKV Executive Director Courtney Yeager presented the Norm Temple Community Volunteer Award, which has been recognizing outstanding volunteerism in the Kennebec Valley area since 1994, to MaineGeneral's Chuck Hays and Kennebec Valley Chamber of Commerce's Katie Doherty for their dedication to leading the Impact2032 initiative. Impact2032 will establish 10-year goals in health, education and financial stability under a shared Kennebec County vision that will accelerate change for local people.

"Chuck and Katie have been co-chairing this community-wide movement since early 2021, and they've provided inspirational leadership to the process and the 70-plus people who are directly involved in setting these goals," Yeager said. "I couldn't begin to count the number of hours they've spent spearheading this work in a volunteer capacity, and for that reason they truly live up to the name of the Community Volunteer Award."

Yeager also presented the Rob Gordon Community Builder Award to Norman and Teresa Elvin for their ongoing commitment to the entire community over the past 35 years. Not only are the Elvins Tocqueville donors, but Norman was a founder of United Way's Day of Caring and continues to sponsor the event and distribute tools to local schools.

During the annual meeting portion of the event, Amy Tardiff of J.S. McCarthy Printers was elected to a second-term as board chair, and Doherty will remain as board vice-chair through 2022. Jessica Norton, of Kennebec Savings Bank, was elected to the board treasurer position.