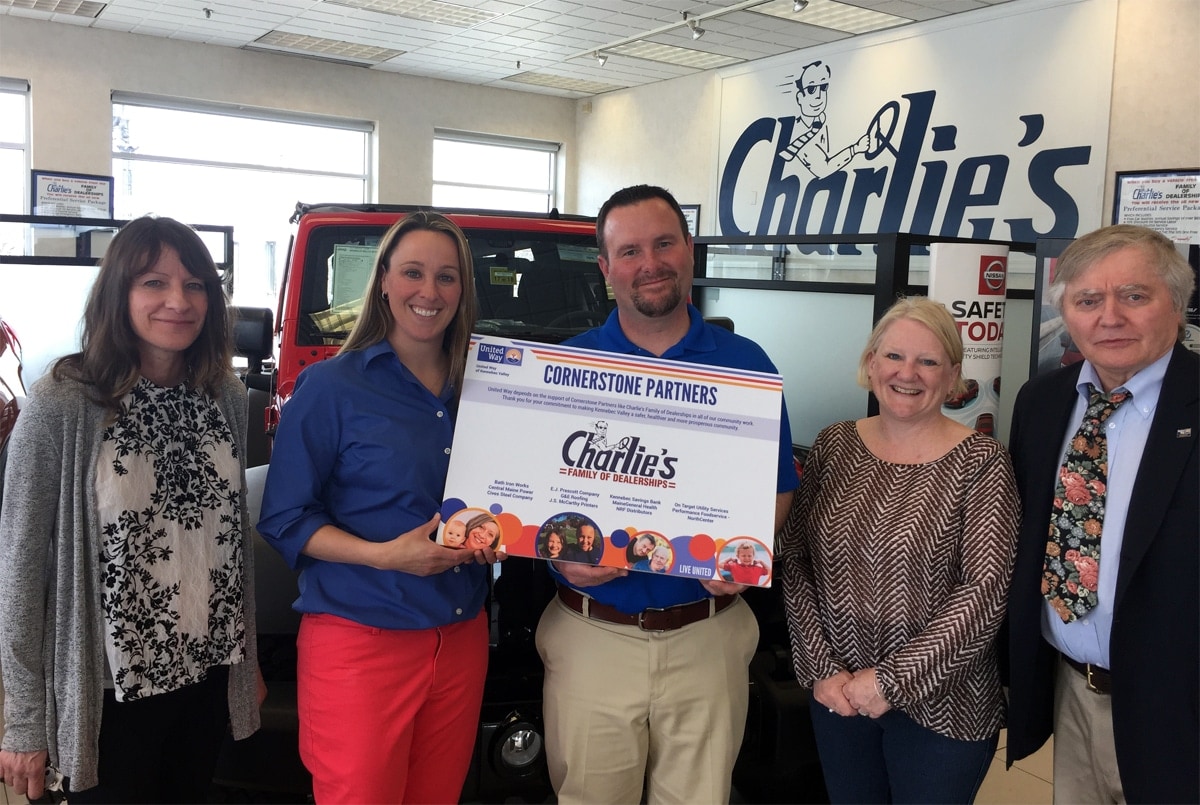 When customers purchase a vehicle at Charlie’s Motor Mall, it is with the understanding that they are joining the Charlie’s family—where customer care is the number-one priority. This sense of support extends to the community as well, with Charlie’s Family of Dealerships being the largest supporter of United Way of Kennebec Valley’s (UWKV’s) annual campaign.

What began as a single-franchise Subaru dealership with 17 employees more than 30 years ago has morphed into the Shuman family’s ownership of eight franchises and nine buildings across Augusta and Winthrop, employing over 240 staff as part of the largest new-car dealer group in the state.

Through a corporate gift and significant employee donations, Charlie’s has pledged to contribute a total of $167,771 in 2017—an all-time high for any business supporting UWKV’s campaign. This contribution establishes Charlie’s as the leader among United Way’s 12 Cornerstone Partners, which collectively make up more than 45 percent of UWKV’s annual campaign.

United Way has been fortunate to build a 30-year partnership with Charlie’s Family of Dealerships and the Shuman family. Charlie’s son, Steve, and daughter, Elissa Emmons, hold key leadership positions and are driving the company into the future.

"We've built a culture at all of our stores. All of our employees realize the importance of giving back to the communities that have made Charlie's the success it is today,” said Steve, vice president and general manager of Charlie’s Motor Mall - Toyota, Jeep, Nissan and Subaru. “The United Way helps out so many great causes and people in need.”

Each summer, Charlie’s hosts a staff cookout to kick off its United Way campaign. The company’s culture of giving leads 100 percent of employees to elect to contribute to United Way through payroll deductions.

Charlie has always believed in United Way’s mission, which enabled 19,804 local people to receive help through 49 nonprofit programs last year. “The money we raise for United Way supports local agencies that aid children, single parents, abuse victims, the elderly, the homeless and anyone who may need shelter, heat, food and counseling,” said Charlie.

The dealership is involved in every facet of United Way, from ensuring the ongoing success of the Augusta Community Warming Center, to Charlie and his wife Nancy’s leadership of the Alexis de Tocqueville Society for high-level donors, to Steve’s position as chair of UWKV’s Annual Golf Scramble. Nancy has also been a longtime friend of United Way in her own right, supporting every UWKV program initiative and making regular in-kind donations throughout the year.

Charlie’s has been giving back to the community since the company first turned a profit in the 1980s. Beyond United Way, Charlie’s Family of Dealerships forms strong partnerships with other area nonprofits to improve the well-being of Kennebec Valley people and the economic vitality of the region. The Shuman family estimates the business has donated more than $2 million to local charities, including the Kennebec Valley Humane Society, Augusta Food Bank, Winthrop Food Pantry, Maine Breast Cancer Coalition and numerous others. The family has also pledged a five-year commitment to support MaineGeneral Health and the hospital’s Alfond Center for Cancer Care.

Charlie took his first job as an office clerk at the former Henley-Kimball Co. before moving on to work for American Motors Jeep Corporation. For 17 years he steadily climbed the ladder, eventually becoming district sales manager for Maine, Massachusetts and New Hampshire. In 1986, he and a partner opened Charlie's Subaru in Augusta. Charlie bought out his partner after five years and continued growing the business.

Today, with customers hailing from across the state of Maine, the company continues to make headlines. In 2016, Charlie was nominated for the national Ally TIME Dealer of the Year Award, which celebrates leaders in the automobile dealers industry who prioritize community support and partnership. In addition, Charlie’s Toyota has been awarded the President’s Cup—a prestigious recognition of sales volume and customer satisfaction—19 years running.

For more information about Charlie’s Family of Dealerships, visit charliesmm.com. To learn more about becoming a corporate partner with United Way, visit uwkv.org or call 207-626-3400.