Partner Spotlight: Thelma pays it forward at Bridging the Gap 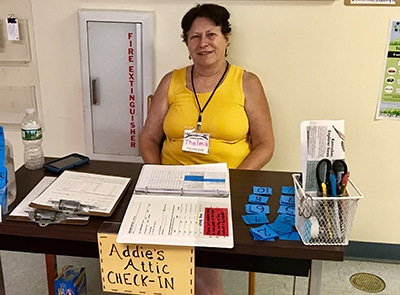 The following account was provided by Bridging the Gap, a United Way partner program.

Thelma is almost always early to her volunteer shifts at Bridging the Gap (BTG), an Augusta-based program that connects people to basic needs, community resources and meaningful volunteerism. Her blue Jeep is a fixture in the parking lot, and she can be found inside, often sorting or stocking clothes for Addie’s Attic, BTG’s clothing distribution program.

“To me, this is more or less like a job--but more fun,” Thelma said.

Thelma possesses a solid work ethic and has volunteered in many capacities at BTG. She even puts in volunteer hours at NRF’s Fresh Starts program, a local outfit that distributes household goods and furniture to people in need.

According to program supervisors, Thelma has blossomed as a volunteer and as a person since she arrived at BTG’s Warming Center in 2016. At that time, she was homeless and needed a safe, warm place to be during the day. At night, she sheltered in her jeep or sometimes couch-surfed. Around the holiday season, the Warming Center supported Thelma with a couple of nights at a motel, for which she was grateful.

During the 2017-18 season, Thelma joined the Guest Volunteer Program, which has continued to be a cornerstone of BTG’s mission to assist individuals in becoming the healthiest version of themselves. Thelma began tentatively as a volunteer but quickly increased her hours, performing daily tasks at the Warming Center and helping to keep Addie’s Attic running smoothly. By the end of the season, Thelma had contributed more than 260 hours—the fifth-highest total of all guest volunteers.

On a personal level, Thelma has been in her own apartment for more than four months. She still drives the Jeep to get around, but she no longer needs to sleep in it. As for volunteering, she is on track to contribute even more hours--this time during the summer season as well as when the weather turns cold.

“It feels like I’ve given something back to the community that’s helped me,” she said.

Bridging the Gap is a program of Emmanuel Lutheran Episcopal Church, located at 209 Eastern Avenue. In addition to the Guest Volunteer Program, BTG oversees Addie’s Attic Clothing Bank, Everyday Basic Essentials Pantry, and the Community Warming Center. The vision of BTG is a community in which everyone is given the opportunity to thrive and live with dignity. For more information, visit btgaugusta.org or call 248-1782.

When you donate to United Way, this is a program that you are supporting.