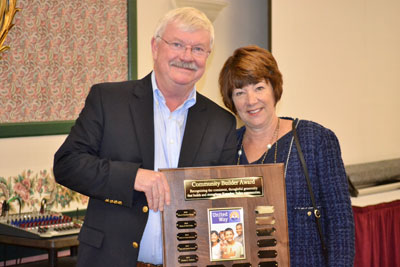 AUGUSTA – United Way of Kennebec Valley (UWKV) launched its 2017 fundraising season with $1.01 million in committed support, the highest amount ever pledged this early in the campaign. Twenty-four businesses reported their advance campaign success to a crowd of more than 300 people at the Campaign Kickoff on Wednesday.

Chuck and Maria Hays, campaign chairs of United Way’s annual appeal, announced a goal of raising $1.625 million by the close of the effort in December. Chuck, president and chief executive officer of MaineGeneral Health, and Maria, professor at the University of Maine at Augusta, have committed to mobilize the caring power of those who live and work in Kennebec Valley. Early progress indicates that United Way has raised 62 percent of its overall goal to date.

During the kickoff event, the Hays family challenged United Way’s community of supporters to increase their contributions. “When United Way’s Allocations Committee met in the spring, they learned that nonprofits’ requests for funding far exceeded the funds available,” Chuck said. “So today we’re asking businesses and employees to consider increasing their pledge by 5 percent in order to bridge the gap for the most vulnerable in our community. To us, giving 5 percent more each week may mean the difference of a cup of coffee or dinner out, but to someone else it may mean having hospice care for a family member or a place to lay their heads at night.”

United Way’s campaign theme, “Planting seeds for a stronger community,” encourages donors to make a gift to bolster the work of the 50 nonprofit programs that UWKV supports. “When you give, you’re planting a seed of hope that our community will be stronger today, tomorrow and well into the future,” Maria said.

The Hays family also presented the organization’s 2017 campaign video, which showcases the Augusta Community Warming Center. The Center, an initiative of United Way that is preparing for its ninth season, offers a safe, family-friendly place for local people to gather during the winter months. Deidrah Stanchfield, who has served as the program’s director for the past four seasons, expressed her appreciation of the community’s ongoing support.

“The Warming Center is a vital resource for so many individuals and families in our city. We couldn’t operate without volunteers, many of whom once used the Center’s services themselves and just want to give back,” Stanchfield said.

Rob Gordon, executive director of UWKV, presented the Community Builder Award to Rick and Patty Tardiff and Conrad and Lois Ayotte, of J.S. McCarthy Printers. The couples were celebrated for their thoughtful leadership contributions and the atmosphere of corporate and employee giving that they have fostered at the Augusta-based company.

“We recognize that United Way is one of many community service organizations that benefit from your shared values of leadership, generosity and service,” Gordon said to the award recipients. “You have set a positive example for others, which helps assure United Way’s strength and continuity.”

UWKV Board Chair Craig Garofalo, of Kennebec Savings Bank, detailed the organization’s newest initiatives, from an Emerging Leaders Society that recognizes rising philanthropists to a 365 Small Business Circle program that invites locally owned businesses to support United Way through a dollar-a-day contribution. The United Way established these programs in order to reach a broader audience of community members throughout the campaign.

During the breakfast meeting, Donna Strickler, executive director of the Sexual Assault Crisis & Support Center, shared information about her organization’s Children’s Advocacy Center, which has received significant funding from United Way this year. The revolutionary program provides a safe, neutral place for the coordinated evaluation of a child following an allegation of sexual abuse, and prevents the child from experiencing the assessment process more than once.

Students from Monmouth Academy also shared stories of their personal involvement with Day of Caring, a UWKV initiative that matches student volunteers with community service projects in 17 area schools. Support from E.J. Prescott Company, G&E Roofing and other local businesses and individuals largely enable the program to reach more about 5,000 students in Kennebec Valley each year.

Pictured: Rick and Patty Tardiff of J.S. McCarthy Printers were one recipient of United Way's 2017 Community Builder Award, along with Conrad and Lois Ayotte.