United Way staff honored for more than 30 years of service 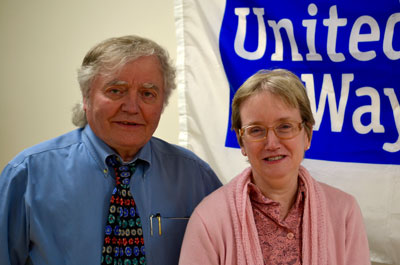 “We are incredibly lucky to have such dedicated staff and leadership at our local United Way,” said Craig Garofalo, UWKV board president. “I am thrilled that the United Way on the national level recognized Rob and Wendy for their outstanding work over all these years."

In 1986, Gordon entered his current position as executive director. He attributes the organization’s long-term success to United Way’s generous contributors, as well as the thoughtful people who have served on its Board of Directors. In 2016, United Way raised $1.5 million to support 49 nonprofit programs.

In that same 30-year period, and with the support of the entire community, the number of programs that United Way funds has more than doubled and initiatives have significantly expanded. In the early 2000s, United Way collaborated with local businesses to establish a Day of Caring student volunteer program, which has evolved to reach 17 schools.The organization recently completed its eighth successful season hosting the Augusta Community Warming Center, a safe escape from the cold weather that attracted more than 3,700 visitor sign-ins. In 2014, the community rallied together to rapidly respond to several community fires by launching a fund to support affected community members through United Way.

The organization and its dedicated volunteers are in the process of reenergizing UWKV’s annual fundraising effort to expand United Way’s partnerships with local people and businesses. Prioritizing relationships in the community is part of the fabric of United Way.

“There is a specialness about Central Maine and an empathy among Kennebec Valley residents. When one person is helped, the entire community is strengthened,” Gordon said.

Gordon has worked alongside Wendy Beaudoin since his first day at United Way. She started her career with the organization in 1981 as an administrative assistant—one of only two employees at the time. Within a few years, her title changed to office manager and eventually to United Way’s director of finance and administration. In her role, Beaudoin supports the financial needs of United Way’s partner programs, establishes internal controls, and consistently achieves unmodified financial audits.

“I’m extremely grateful for the capabilities and loyalty of Wendy, who has successfully managed United Way’s finances for so many years,” Gordon said.

During Beaudoin’s 36-year tenure, the United Way’s fundraising campaign has increased from $220,000 to $1.5 million. The agency’s longstanding commitment to progress and the well-being of Kennebec Valley people encouraged Beaudoin to build a career at United Way.

“It’s wonderful to wake up every day and be part of an organization that does so much good for our community,” Beaudoin said. “I also feel fortunate to collaborate with other United Way finance staff throughout the state of Maine in an effort to streamline processes and compare best practices.”

United Way Worldwide established the 30-Year Service Award in the early 1970s to recognize the achievements and lifelong commitment of individuals who have dedicated their careers to advancing the common good through work with United Way.